Tetlow King Planning are very pleased to have assisted in the appeal success for 180 dwellings on safeguarded land in Chorley Borough on behalf of Gladman Developments Limited. The inquiry was among the first virtual inquiries held in the country by the Planning Inspectorate. 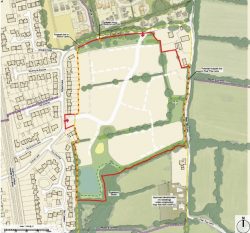 The appeal proposed 30% affordable housing (54 homes) in accordance with adopted policy. In addressing this at paragraph 54 of his report Inspector Mike Hayden found that there were 655 households on the Council’s Housing Register “of which 124 had selected Euxton as their preferred location and had a local connection to the Borough” and therefore “based on current social housing needs, there is a requirement to increase the supply of affordable housing in Euxton”.

He went on at paragraph 55 to explain that despite a healthy track record of both market and affordable housing delivery in the Borough over the past decade, “there is evidence of steadily worsening housing affordability” and that “average house prices in Chorley increased by 15% between 2010/11 and 2017/18 and the ratio of house prices to incomes in the Borough has increased by 10% to 6.88 since the start of the Plan period”.

Mr Hayden noted at paragraph 56 that whilst the parties agreed that based on a five year housing land supply of 1,617 dwellings, 60 affordable homes per annum could be delivered within the next five years but that “this would result in a shortfall of around 360 affordable housing units in the Borough over the next five years. The Council could offer little evidence as to how it would address this need.”

At paragraph 57 of his report the Inspector found that:

“The affordable housing component of the appeal scheme would be a significant social benefit. It would provide for households on eth Housing Register with a need for social housing in Euxton, reduce the shortfall in the supply of affordable housing across Chorley over the next 5 years and help to address the growing affordability problems in the Borough”.

Although there was no adopted policy requirements to do so, the appeal proposed 10% (18 plots) as serviced plots for self-build or custom housebuilding. Inspector Hayden recognised at paragraph 58 of his report that although this was not a requirement of the Central Lancashire Core Strategy or the Chorley Local Plan, “the housing needs of people wishing to build their own homes is one of the types of housing need which paragraph 61 of the Framework seeks to address”.

He recognised at paragraph 59 that whilst Chorley’s Self-Build register contained expressions of interest in serviced plots from 9 individuals at March 2020, “the Central Lancashire Housing Study (CLHS) acknowledges that this may underestimate demand for self-build, because awareness of the Right to Build Registers in England is low”.

Paragraph 60 goes on to set out that:

“The PPG advises that data on registers can be supplemented from secondary data sources to obtain a robust assessment of demand45. The Buildstore Custom Build Register, the largest national database of demand for self and custom build properties, has 185 people registered as looking to build in Chorley, with 699 subscribers to its PlotSearch service46. Data from a national survey conducted by Ipsos Mori for the National Custom and Self-Build Association, when applied to Chorley’s population, indicates that as many as 1,929 people may wish to purchase serviced plots in Chorley over the next 12 months47. Whilst the secondary data sources may reflect a level of aspiration rather than genuine need and include households registering an interest in more than one district, the CLHS concludes they provide evidence of a greater level of demand for self-build than the Council’s register shows.”

Turning to supply, Inspector Hayden found at paragraph 61 that whilst the Councils five year housing land supply statement contains 49 self-build and custom housebuilding plots with planning permission, including 20 in Euxton only 27 have been secured by legal agreements and:

Paragraph 62 of his report found that:

“The evidence clearly indicates that the 5 year supply of self-build plots in the Borough is likely to fall well short of the anticipated demand. As such the provision of a further 18 self-build and custom housebuilding plots on the appeal site would make an important contribution to the need for this type of housing in Chorley. This would be an additional benefit of the scheme to which proportionate weight should be given in the planning balance. “

In undertaking the planning balance exercise at paragraph 100 the Inspector found that “the public benefits of the appeal scheme include its contribution to reducing the shortfall in the housing supply and to meeting the needs for affordable and self-build housing.”

He went on to conclude at paragraph 102 that:

“The designation of up to 54 of the units as affordable homes, of which 38 (70%) would be social rented tenure, would reduce the 360 unit shortfall in the projected supply of affordable rented housing by more than 10%, which also carries significant weight in addressing housing needs in the borough.

The provision of 18 of the units as self-build or custom housebuilding plots should also attract significant weight in favour of the proposal, given the level of demand for self-build as a sector of housing need in Chorley.”

Finally, at paragraph 120 the importance of securing serviced plots by legal agreement was acknowledged by the Inspector where he set out that:

“The proposal is also subject to the signed UU, dated 6 July 2020, to secure the provision of 30% affordable housing, 10% self-build and custom housebuilding plots…the obligations accord with the development plan and are required to mitigate the impact of the proposed development. As such they are necessary to make the development acceptable in planning terms. They are also directly related to the development and fairly and reasonably related in scale and kind to it”

James and Andy are delighted to have assisted in the appeal. Giving evidence and being cross examined via video link was a new challenge and for the foreseeable future appears likely to be ‘the new normal’.