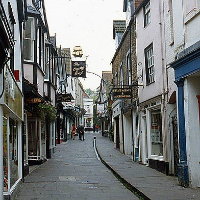 Frome Town Council made a successful bid to be one of the DCLG’s funded Neighbourhood Plan frontrunners. The Town Council moved forward to establish the foundations of a plan which reflects the wishes of the local community.

At the time Frome benefited from having a community strategic plan (Vision for Frome), Mendip District Council’s draft Core Strategy, the Town Council Strategic Plan and a draft Design Statement for Frome. These documents were used by the Neighbourhood Plan Steering Group to compile a list of identified priorities. These priorities were then tested using a Citizens’ Panel, a small representative group of people, to ensure that the identified priorities are still relevant.

TKP’s brief was to help to draft policies that:

Robin Tetlow, Chairman, commented that the company was:

“Very pleased to be involved in this exciting initiative which it is at the cutting edge of current planning policy and practice.”

© Image copyright Ronald Searle and licensed for reuse under this Creative Commons Licence.