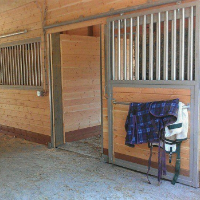 Tetlow King Planning were successful in retaining an unauthorised stable building in the Green Belt to the south of Bristol. This involved negotiating with North Somerset Council that an extant planning permission existed on the site, which subject to a number of actions could be lawfully implemented to allow for the retention of the building.

There were a number of major obstacles in retaining the building.  Firstly, the application was due to expire within three weeks of first instruction. Secondly, a new application would not be possible due to the emergence of new guidance on flooding (PPS25) which in planning policy terms would render the site unsuitable for stables. A further problem was that a number of unauthorised works had taken place including the insertion of additional windows, a new pitched roof in lieu of a sloping roof and different materials. There was also the requirement to discharge two pre-commencement conditions.

Builders were immediately instructed to remove all of the unauthorised works to leave a building in a position to be rebuilt in accordance with the original consent, if the two pre-commencement conditions could be discharged within time.

A sample of the materials was provided and an ecological report was prepared and submitted. These were approved on the day before the application was due to expire.

A site visit was arranged where the Enforcement Officer inspected the building and confirmed that the works were now acceptable and the building was lawful.