Tetlow King Planning (TKP) are delighted to have assisted in the recovered appeal success for a mixed used development of up to 625 dwellings and 2.9 hectares of employment land on the edge of Ledbury, on behalf of Bloor Homes Western.

James Stacey, Senior Director, provided expert evidence on the need for affordable housing in Ledbury and across Herefordshire. 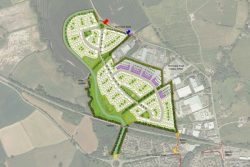 A signed S106 Agreement provided for 40% of the dwellings to be provided as affordable housing in accordance with the Core Strategy. The advising Inspector, Lesley Coffey, noted that the proposal included the delivery of a very substantial amount of market housing and affordable housing:

It was agreed between parties that “in the context of the market and affordable housing shortfall, the housing delivery benefits of the appeal scheme are substantial.”

Inspector Lesley Coffey, advising the Secretary of State, asserted at paragraph 9.97 of her report that:

“The ability to deliver Affordable Housing on this site is an important part of the appeal proposal and benefits of the scheme. There is a well-established national housing crisis in this country which is causing misery to millions of people. It is a manifestation of an underlying persistent and pervasive trend over many decades. We build too few homes and far too few affordable homes.”

She then continued to state at paragraph 9.98:

Addressing past and future affordable housing delivery specific to Ledbury itself in more detail, the Inspector concluded the following:

“LTC [Ledbury Town Council] state that 259 affordable dwellings have been permitted in Ledbury in recent years. Notwithstanding this, only one affordable dwelling has been built in Ledbury since 2011. During my site visit I noted that the sites to the south of the town were currently under construction, and these may contribute to the supply of affordable housing, but due to the failure to deliver affordable homes over a period of many years there remains a considerable and pressing need for such housing. I therefore give substantial weight to the delivery of affordable housing.” (Paragraph 16.123)

In determining the appeal, the Secretary of State concurred with these findings, thus underlining the importance of addressing affordable housing needs.