The West Malling office of TKP has successfully obtained planning permission on appeal for the redevelopment of a single storey bungalow to provide a two-storey, five bedroom family dwelling within the confines of Trottiscliffe village, which is also washed over by the Kent Downs AONB. 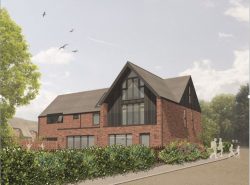 The application was refused by the Tonbridge and Malling Borough Council’s planning committee against the advice of the case officer on the basis of alleged harm to the visual amenities of the locality and wider landscape as well as having an overbearing impact on a neighbouring property.

The replacement dwelling introduced new design elements that were not prevalent within the existing group of properties, which formed part of the reason for refusal by the committee. However, the inspector stated that:

“I accept that the proposed design would introduce a new element into the street scene. However, to my mind the design is sensitive to its context and would sit comfortably alongside the other houses in the group.”

Furthermore, a partial award of costs was made on the basis that the council were unable to substantiate part of their refusal on harm to the residential amenities of the neighbouring property. In the appeal decision the Inspector noted:

When then going on to consider the matter of costs, the Inspector commented that:
“The Council has not identified anything unusual or particular about the design of the proposal, the design of No 2 or the layout of the houses and their respective gardens that would result in an unduly overbearing or enclosing effect. This limb of the reason for refusal was not supported by evidence. Reference to the proposal being to the south of No 2 was not pertinent, for the reasons given in my appeal decision.”

Iain Warner, Director at West Malling, stated that:
“This decision goes to highlight that just because proposals result in a change to the status quo of an area that does not of itself mean that schemes are unacceptable. The impacts of the proposals were fully considered by the case officer who determined that on balance the scheme was in accordance with the development plan. Whilst members are entitled to a different opinion it is important that in such cases the concerns are properly evidenced both when making a decision and then defending any subsequent appeal. This decision shows that poorly founded refusals do nobody any favours – the council now face a partial cost claim and the appellants have been delayed in terms of constructing their new family dwelling.”