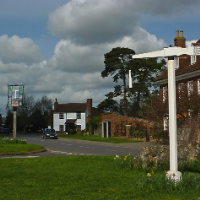 Tetlow King Planning (TKP) were successful in appealing a refusal for a single dwelling on land adjacent to a Listed Building in the village of Offham, near West Malling, in Kent, on behalf of private clients.

The site is in a village location overlooking the cricket ground. A number of planning applications had been previously submitted and refused for an infill dwelling on the site.  The applicant employed the services of TKP and Tetlow King Architects (now known as Thrive) in order to produce a well conceived and high quality scheme, compatible with its attractive setting.

The application was supported by the planning officers of Tonbridge and Malling Borough Council. Following a site visit, however, the Planning Committee refused the application. The members considered that the proposal for a two storey four bed house affected the setting of the Listed Building adjacent as well as the character and appearance of the surrounding area.

The Inspector weighed the arguments of both sides; concluding that the proposal was well designed and would not materially affect the setting of the Listed Building.

© Image copyright Eileen Henderson and licensed for reuse under this Creative Commons Licence.