Success at appeal for house extension in Bristol

Tetlow King Planning (TKP) are very pleased to have secured planning permission for a two-storey side extension, at appeal. While this is a small project it is of course of great importance to the householder and their family. TKP are always happy to assist with any size of project to help people though the system where we can. 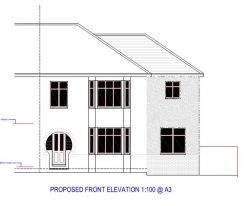 Bristol City Council (BCC) had refused permission for the extension, to an end-of-terrace property in Brislington. The Council had determined that the extension would be neither subservient to the existing dwelling, nor a ‘seamless extension’ to the terrace.

Furthermore, BCC said it would be an ‘incoherent’ addition, which would harm the streetscene and set an undesirable precedent. They claimed it would conflict with their guidelines (Supplementary Planning Document, SPD2) and Planning Policy. They also objected to the design of the windows.

By way of a householder appeal Principal Planner, Oliver Marigold, was able to demonstrate that the Council’s SPD2 is out-of-date and does not reflect current legislation. He also showed that the extension would have a lower ridge height and a narrower width than the host dwelling. Despite not being set back from the front of the house (one of SPD2’s requirements), it was argued that the extension would still be subservient.

The Inspector agreed with TKP that the extension would not be a discordant feature in the streetscene. He found that this was a good reason for departing from the Council’s guidance and allowed the appeal. The Inspectors decision can be viewed here.